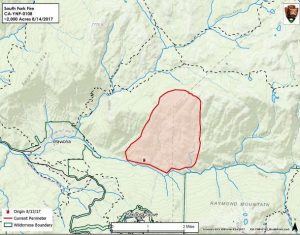 Update at 5:12pm: Yosemite Fire Management’s last estimate of the South Fork Fire within two miles of Wawona at 900 acres.

There is no report of any containment yet. According to Yosemite National Park rangers, the blaze, which broke out Sunday, might possibly have sparked due to a recent lightening strike. While no trails, campgrounds or popular Yosemite attractions nearby have yet been affected and no evacuation orders issued, residents and visitors are asked to remain on the alert.

Air resources are in active use as firefighters continue trying to tie the fire into natural barriers and assessments are being done with regard to possible trail closures. For the next 12 hours, fire management officials say personnel on-scene will continue to aggressively suppress fire spread toward the community of Wawona on the fire’s west flank of fire. SCA Camp and homes and Chilnualna Falls Ridge are on voluntary evacuation at this point. Over the next 24 hours, they note that they will be preparing the community for potential evacuations.

Original Post at 9:24am: Yosemite, CA — A fire burning 1.5 miles east of the community of Wawona is up to 400 acres and there is no containment.

The South Fork Fire is just upstream from Swinging Bridge in the South Fork of the Merced River drainage. The fire is burning in a wilderness area, but active fire suppression efforts are underway due to its close proximity to Wawona. Initial resources responded shortly after 2:30pm yesterday and tactics included helicopter bucket work and tanker drops on the left flank of the fire. Today, the strategy is to contain the west flank and keep the fire north of the river in order to protect the community of Wawona.

The fire has been burning Ponderosa Pine and transition into areas of White Fir. It is an area of dense mixed conifer forest with areas of heavy tree mortality. Yosemite fire officials report that most of the projected growth will occur on the north and northeast flanks, which is wilderness, and away from Wawona. Smoke is expected to remain heavy, especially during the early morning and evening hours.  Visibility may be impacted along Wawona Road, Glacier Point Road, Yosemite Valley and Tioga Pass.

Residents in the community of Wawona have been advised to make preparations in the event that they need to evacuate.

What ignited the fire remains under investigation. The elevation is 5,100 ft.

Click here to view a map of the South Fork Fire