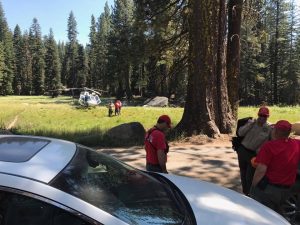 The sheriff’s office reports 70-year-old avid hiker Igor Skaredoff of Martinez had been staying in the Emigrant Wilderness, 13 miles from the Crabtree Trailhead at Wood Lake, and was heading to Red Can Lake for a day of fishing. When he failed to return on Saturday evening the search and rescue team was contacted, and assistance was requested from Forest Service rangers and a CHP helicopter.

Skaredoff was located Sunday afternoon near Five Acre Lake. He heard his name being called by a search and rescue team member, so he blew into a whistle, which helped rescuers locate him. He told officials he got turned around at some point and could not find his way back to Wood Lake. He did have extra food with him and slept near a cabin he wandered upon. He also thankfully had a filter with him so he had access to plenty of water. He was flown by helicopter to the Aspen Pack Station where he did a de-briefing with rescuers and was reunited with friends.