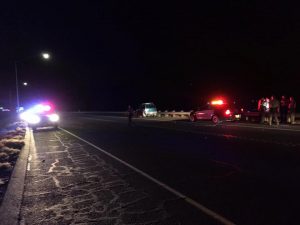 Sonora, CA – An early morning drunk driver arrest is being shared as a prime example of how important it is to promptly report erratic motorist activities.

During the wee hours Tuolumne County sheriff’s officials say a related incident caused a lane to be blocked on Highway 108 in East Sonora, shortly after their office received a call around 2:30 about a Nissan Xterra driving slowly down westbound Highway 108 from Soulsbyville — without its headlights on.

Fortunately, a deputy was able to locate the vehicle, which was driving slowly and crossing over the double yellow lines into the oncoming lane, actually forcing the deputy to avoid being hit by pulling off the roadway. The deputy subsequently initiated a traffic stop on the bypass near the Phoenix Lake Road exit. However the driver, 52-year-old Jeffrey Adams, reportedly chose to stop his SUV in the middle of the lane instead of pulling over to the shoulder.

According to the incident report, Adams swung open the driver-side door, exited his vehicle and did not follow the deputy’s verbal orders. He also allegedly attempted to get back into the SUV to drive away and swung his arm out the driver-side window in an attempt to bat away the deputy. Adams also reportedly physically resisted deputies on-scene but was subdued and booked into the Tuolumne County Jail for driving under the influence of alcohol and for resisting arrest.

Spokesperson Sgt. Andrea Benson shares, “We want to thank the anonymous caller for reporting the drunk driver as a life may have been saved this morning.”

She adds, “If you do see a car driving in the dark without headlights on, driving erratically, swerving or driving into the oncoming lane, please pull over when it is safe and call law enforcement. You can call the non emergency line or dial 911.”