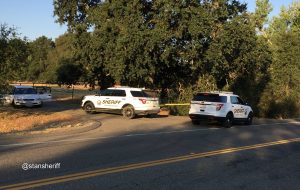 Knights Ferry, CA — The Stanislaus County Sheriff’s Office reports that a multi-agency investigation is underway in relation to a deputy involved shooting near the 50’s Roadhouse Diner in Knights Ferry.

It happened at 11:25pm on Monday on Sonora Road. A Stanislaus County Sheriff’s Deputy contacted two men inside a vehicle. One of the men, 35-years-old and unidentified, was placed into the back of the patrol car. The second man, 28-years-old and also unidentified, fled the scene on foot. The deputy was able to catch the man, and a physical fight ensued. During the altercation the sheriff’s deputy shot the suspect with a firearm. The man was later transported to an emergency room for treatment. The deputy had minor injuries and was treated and released at a local  hospital.

No further details have been released at this time.