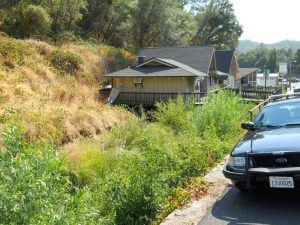 Sonora, CA — A man who officials say might have been involved in a recent Jamestown burglary was arrested following a foot chase near the Mother Lode Fairgrounds.

The Tuolumne County Sheriff’s Office took a report of three mountain bikes being stolen on Tuesday from a home on Black Bart Drive in Jamestown. The following day, Wednesday, a deputy spotted 47-year-old David Joslin pushing a bike on Stockton Road that matched the description of one of the bikes stolen. Joslin, who already had several outstanding arrest warrants, threw the bike and his backpack on the ground and took off running towards the Mother Lode Fairgrounds. Joslin jumped a fence that led him to Woods Creek, and after a short foot chase was captured by the deputy.

Joslin was booked into county jail on charges of possession of drug paraphernalia, resisting arrest, and for having warrants for failing to appear in court on burglary and possession of stolen property charges.

Deputies are investigating whether the bike in Joslin’s possession was the one taken from Tuesday’s burglary.