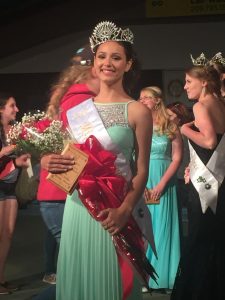 Salvitti is a seventeen year old senior at Calaveras High School. She lives in West Point.

During the talent portion of the Scholarship Pageant, which was 30% of the judges total vote, Salvitti sang an original song and played a guitar. The song was in honor of a very close friend who passed away in 2015.

Salvitti will be using her $1,000 Angels-Murphy’s Rotary Club Scholarship this fall, as she plans to attend Diablo Valley College in Pleasant Hill. From there she would like to attend U.C. Davis. Salvitti would like to study veterinary medicine.

In addition to the Scholarship, Salvitti received a tiara and sash and tied for Best Poetry Award.