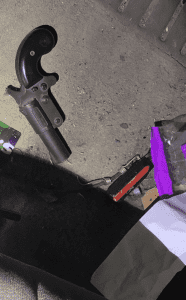 Groveland, CA – A man was arrested after an illegal gun was found in his possession.

The Tuolumne County Sheriff’s Office reports that 26-year-old Clinton Douglas Hart was pulled over on Main Street in Groveland because his vehicle had a cracked windshield, and the registration was over six months expired. The Sheriff’s Office reports that Hart displayed symptoms of being under the influence of a controlled substance. A deputy asked him if there was anything illegal  in the vehicle, and Hart admitted to having a loaded Colt 45/410 short barreled shotgun under the driver’s seat. This type of weapon is illegal to possess in the state. The deputy inspected the gun, and found a shotgun shell seated in the barrel.