Local Casino Unveils Its Next Phase Of Expansion 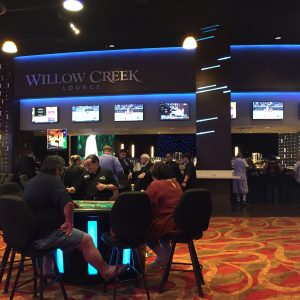 Tuolumne, CA — Black Oak Casino Resort and members of the Tuolumne Band of Me Wuk Indians celebrated Wednesday night as the ribbon was cut to officially open the new Willow Creek Lounge.

It is part of the next phase of the casino’s expansion project that began last year, as earlier reported here. Casino General Manager Aaron Moss had this reaction, “We’re very excited. This is a great day to be able to showcase our entertainment. The first thing they’re [customers] going to notice is probably the 16 foot by 10 foot television. That’s going to allow us to show sporting events, watch the bands on stage and allow some flexibility to use the Willow Creek Lounge outside of just music entertainment.”

The new 5,000 ft. lounge sits across from the old one and as the pictures in the image box show it is larger and outfitted with state of the art audio, video and lighting. Moss indicates the next step will be to open up the old lounge and spread out the gaming floor by moving slot machine into that space. The old stage will be refurbished for promotional activities. Coinciding with that an 18 inch elevated platform will be built in the back of the casino to house a high limit area and slot machines with the newest technology.  The hope is to have this second phase done in the next three to five months. Moss also revealed a special new attraction to round out the third phase of the expansion, “We will remodel the Penny Mill slots area and it will become a live poker room. It will be the first time that Black Oak Casino has had live poker outside of electronic poker tables.”  He says this third phase should be complete by the end of the year or the first quarter of next year.

The expansion at the Black Oak Casino Resort’s RV Park facility has begun with the construction of more than 100 spaces with full hook-ups. Moss anticipates it could open later this year. In addition, there will be an expansion of outdoor events at the nearby Westside property, which will once again serve as the venue for the Strawberry Music Festival. Moss announced it will also be the site of this year’s American Cancer Society Relay For Life in Tuolumne County taking place in June.

The final phase of the expansion is a golf course with surrounding homes that the resort had hoped to have opened last year, according to Me Wuk Tribal Chairman Kevin Day, who updates the delay, “We found out with the historical bridge and dam that we have, there is a lot more to it than we initially thought. So, we’re just going through the process, like everybody else would, to make sure it’s right, safe and built to its original standard. We are hoping we can start selling lots by this time next year and shortly after the golf course.” But Day stresses that is just a goal and not a promise.

For now customers can enjoy the new lounge, which patron Linda Martinez called a “big improvement” and another on hand tonight, Jamie Marshall remarked, “It’s fantastic. This is much bigger. The dance floor is bigger. I like the screen. It’s awesome – too cool!”