Caltrans Road Roundup For Next Week 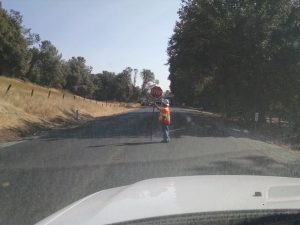 Sonora, CA — Crews will be busy all week on several highways in the Mother Lode and motorists will face delays.

Caltrans’ Tuolumne County guardrail improvements project may bring nightly ten-minute delays due to flaggers conducting one-way traffic controls along Highway 49 and 108 Sunday through Friday morning. The sections include between County Dump Road and Twain Harte Drive from 6 p.m. until 9 a.m.; also between Helipo Road and Snowwhite Ridge Drive from 7 p.m. to 7 a.m.; and along Highway 108/49 between Woods Creek Bridge and Old Wards Ferry Road from 9 p.m. until 6 a.m. During that same time frame, rail work will be done along Highway 49 from Harvard Mine Road to Rolling Hills Road and from Columbia Way to Pesce Way in Sonora.

A special event will close down Highway 49 from School Street to Restano Way in Sonora and the left turn lanes on Highway 108 onto South Washington Street from 9:30 a.m. to 1 p.m. Motorists can expect 20 minute halts while the 60th annual Mother Lode Roundup Parade delights the crowd lined street.

Grinding and paving is slated from 7:30 a.m. to 3:30 p.m. with one-way traffic prompting ten-minute delays between Moccasin and Bear Valley Road on Highway 49.

On Highway 132 expect brief traffic stops Monday through Wednesday during drainage work slotted between the Stanislaus/Tuolumne county line and Highway 49 in Coulterville from 7:30 a.m. until 3:30 p.m.

The 24/7 ten-minute delays remain on Highway 120 at the James E. Roberts Bridge by Lake Don Pedro as the multi-million dollar repair and replace project continues through late fall.

Crews will be busy on Highway 4 at various locations from Angels Camp to the Alpine/Calaveras County line that will create ten-minute slowdowns.  Caltrans provides this schedule:

Additionally, in Angels Camp along Highway 49 from 7 a.m. to 3:30 p.m. Monday through Wednesday stretching from Church Street to Bragg /Stork Road crews will be doing paving work creating fifteen-minute delays.

Utility work on two sections of Highway 26 means more ten-minute stops for travelers on Tuesday and Wednesday from 7 a.m. until 5 p.m. The locations are Olive Orchard Road to Driver Road and Lower Dorray Road to Upper Dorray Road.

On Highway 12 at Burson Road electrical work is scheduled every weekday, which may slow traffic for ten minutes at a time between 7 a.m. and 3:30 p.m.