Getting On the Slopes Faster 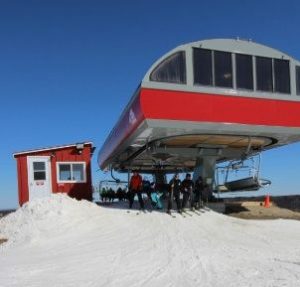 Bear Valley, CA – Skiers could soon get to the top run of Bear Valley in Calaveras County faster to have more time to hit the slopes.

The Skyline Bear Valley Resorts has hired Leitner-Poma of America Inc. based in Grand Junction Colorado to construct and install a new high-speed six-pack chairlift to be completed this year in time for the start of the 17/18 ski season in late November.  It will be able to transport six passengers at a time from the mid-mountain ski lodge to the top of the mountain (8500’ elevation) nearly three times faster than the current lift. Resort officials report that the project is pending process approval by the U.S.D.A. Forest Service as the resort is in the Stanislaus National Forest.

Bear Valley touts that the state of the art detachable chairlift can get guests to the mountain’s peak in just over three minutes along 11 towers with fifty eight carriers.

“This lift investment is a game changer for Bear Valley that will greatly enhance our guests’ experience during the winter operations, and with the new high speed lift being 100% downloadable it aligns well with our heightened focus on summer recreation and activities on the mountain,” said Andrea Young, general manager at Bear Valley. “This is a continuation of the many improvements that Skyline Investments is making at Bear Valley on the heels of two strong winters which will elevate the guest experience and further establish the area as a year-round Sierra family destination.”

Resort officials note that this project will bring Skyline’s investment to $6 million in improvements to Bear Valley in just two years including new ski and snowboard rental fleet, new snow cats for grooming, enhancements to the snowmaking system and equipment, IT and WIFI upgrades, new ski trails, remodeling of the ski guest areas, Creekside restaurant, BV Lodge lobby, lounge and guest rooms among other things.