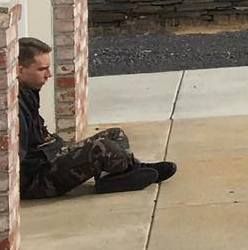 Sonora, CA – A home surveillance system is being credited with nabbing a thief before he was able to take off with any loot from a Sonora area residence.

A Ridgewood Drive resident was out of town when he got a motion detection alert for his home.  It linked him to a live picture of his house where a masked burglar was checking for any open door or window and eventually breaking into an attached garage. He called the Tuolumne County Sheriff’s Department immediately to report the crime. When deputies arrived at the home they found 24-year-old Daniel Oneal of Antioch behind the wheel of a 1999 blue Ford F250 in the driveway. Deputies ordered Oneal to get out of the truck and he complied.

A records check revealed that the truck was recently stolen out of Antioch. A search of Oneal and the truck turned up a heroin smoking pipe, a mask, a BB gun and nine sets of different car keys.  Sgt. Deborah Moss indicates, “He may have used those to steal other cars or he may have stolen them. It is unknown at this point why he had those on him.” She adds that no items were taken from the garage.

Oneal was arrested for burglary, possession of a stolen vehicle, burglary tools and drug paraphernalia.