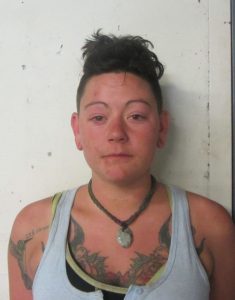 Sonora, CA — The Sonora Police Department arrested a 26-year-old woman outside the lower Sonora SaveMart on Stockton Road after she allegedly assaulted a store employee.

The Police Department reports that 26-year-old Kaitlyn Marie Zinn allegedly started yelling at a store employee in the parking lot about her shopping cart. The police report adds that she “grabbed the SaveMart employee and began shoving her around.”

When the first responding officer arrived, at around 5pm yesterday, he observed Zinn yelling at another citizen. She was detained and placed under arrest. The officer also confiscated a 12 inch meat cleaver concealed on her waistline. Zinn was booked into county jail and her bail was set at $10,000.

Her charges include possession of a dirk or dagger, public intoxication and assault.