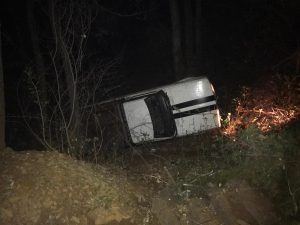 Columbia, CA — A Soulsbyville man is wanted for not only leading a deputy on a chase and crashing his truck, but allegedly trying to run over the deputy as well.

Tuolumne County Sheriff’s Officials are asking for the public’s help to capture 32-year-old Kasey Questo whose picture is in the image box. The chase happened Monday, March 20, when a deputy attempted to pull Questo over on Quail Mine Road in Columbia. Instead, sheriff’s officials say Questo took off driving recklessly headed down a dirt road off of Gunsight Road. The road’s hazardous conditions forced the deputy out of his patrol car to continue the pursuit on foot. He found the truck further down the road and ordered Questo out of the pickup repeatedly. That is when Questo hit the gas and began backing up. The deputy had to jump out of the way to avoid being struck. Questo lost control of the pickup and it rolled down an embankment landing on its left side. He climbed out of the truck and ran into the nearby woods.

A search of the abandoned truck netted methamphetamine, marijuana, and drug paraphernalia. Anyone with any information on Questo’s whereabouts or the incident is asked to call the Tuolumne County Sheriff’s Office at 533-5815.

Questo was already wanted on charges of burglary, ID theft, forgery and theft from an elder. He now faces additional charges of evading a peace officer, assault with a deadly weapon, possession of a controlled substance and possession of drug paraphernalia.