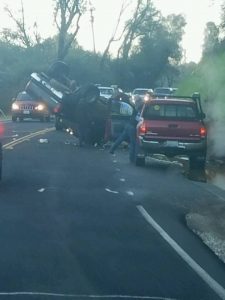 Crash On Highway 49 near Dossi Way

Sonora, CA — One person was injured in a crash that happened Thursday morning on Highway 49 near Columbia Way.

The CHP reports that 39-year-old Jeff Dyer of Angels Camp came to a stop in his 2006 Ford F-150 on Highway 49 because other vehicles were doing the same in front of him. He was soon hit from behind by a 2002 Chevy Silverado driven by 18-year-old Jake Lee of Sonora. The CHP reports that Lee had limited visibility because his windshield was frosted over with ice. After Lee hit the brakes and swerved in hopes of avoiding the F-150, his Silverado overturned. Dyer received minor injuries in the crash and was taken by ambulance to Sonora Regional Medical Center. Lee was not injured in the incident. The crash happened at 7:40am.