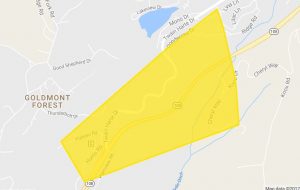 Twain Harte, CA — The CHP reports the west entrance to Twain Harte has been closed due to a solo-vehicle wreck where a tree and wires have come down leaving 92 PG&E customers without lights.

Officers are directing traffic at the scene where the vehicle went off the roadway into a ditch, hit a tree and brought power lines down on the vehicle on Twain Harte Drive near Ponderosa Drive. The CHP reports a PG&E crew is working to remove the wires and free the driver from the vehicle.

The oak tree that came crashing down is blocking both lanes of Twain Harte Drive. PG&E has confirmed a tree in contact with electrical equipment is to blame.

The CHP is asking motorists to avoid the area and use the east entrance into Twain Harte.