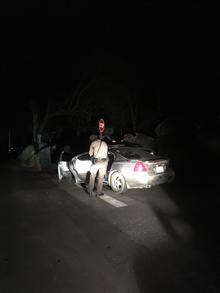 Tuolumne County sheriff’s officials say deputies, after pulling over a 2004 gray Pontiac Grand Prix on Lime Kiln Road at Lime Rock Drive talked with 28-year-old Ashley Menking of Sonora who was behind the wheel. Officials report she admitted that she was wanted on several warrants. A subsequent search reportedly found her to be in possession of over ten grams of methamphetamine and a hypodermic needle.

A records check on all four of the vehicle’s occupants determined that there were also outstanding warrants on a second individual, 36-year-old Ashlianne Palmertree. While searching her and her belongings deputies discovered hypodermic needles, several small plastic baggies and a bag containing over two grams of meth.

Menking and Palmertree were arrested and transported to the Tuolumne County Jail; the remaining two passengers were released at the scene.

Menking now faces charges of possession of methamphetamine, drug paraphernalia and sales in addition to her four warrants for failing to appear, violation of probation on drug possession, and presenting false identification to a peace officer.

Palmertree was booked for possession of meth and drug paraphernalia; also for her four warrants for failing to appear, violation of probation on drug possession, and traffic violations.