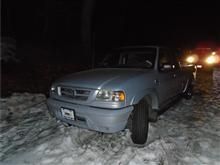 Tuolumne County, CA – The Tuolumne County Sheriff’s Department reports deputies found an alleged thief behind the wheel of a stolen vehicle at the Highway 108 Sno-Park.

Sheriff’s officials report that sighting a suspicious truck in the parking lot, located at Highway 108 and Cow Creek Road, a park employee called 911. Officers arrived on the scene just after 1 a.m. Friday to find a 2002 Mazda B3000 truck with no license plates and a man inside. The pickup was behind the locked parking gate, which is what initially caught the eye of the worker.

The driver, 28 year old Michael Urban, stepped out of the pickup as deputies approached. A records check on the pickup confirmed it was recently stolen out of Oakdale. Urban was arrested and booked in the Tuolumne County Jail for possession of a stolen vehicle.