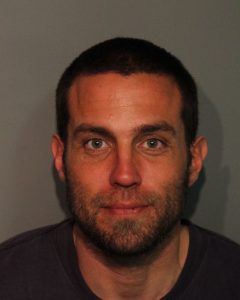 Angels Camp, CA — A wanted man was arrested in Angels Camp after a police officer spotted him sitting on a bench in the 200 block of S. Main Street.

The officer recognized 39-year-old transient James A. Moser III for having an outstanding warrant related to a burglary case in Calaveras County. During the arrest the officer also discovered that Moser was in possession of a rifle round, which he is prohibited from possessing. He was also in possession of an iPhone, which the police department later discovered had been stolen. In addition, Moser had an outstanding warrant related to possession of narcotics in Tuolumne County. He was arrested and transported to Calaveras County Jail.