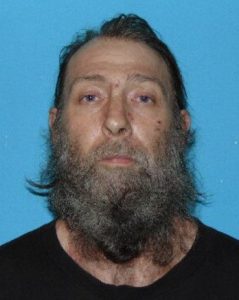 Sonora, CA — An alleged burglar in Columbia was nailed with help from a neighbor’s detailed description, which helped lead deputies to him.

On Sunday evening deputies were called to a home on Shale Rock Road after the resident found it in disarray. Recounting the incident, Tuolumne County Sheriff’s spokesperson Sgt. Andrea Benson states, “Furniture was broken, trash was strewn in the living room, and the suspect left behind a shoe and clothing. There were several tools and a weed trimmer missing from inside the residence.”

Luckily for the victim, Sgt. Benson says that a nearby neighbor was able to give detailed information relating to a man seen at the home several times. Based on the apt description, deputies were able to identify 47-year-old David Joslin, who was known to frequent a nearby home on Shale Rock Road.

“As they approached the home they could see a crate near the front door that contained the described stolen items. They questioned Joslin…and he admitted to acquiring them at the victim’s home,” Benson shares. After the property was positively identified it was returned to the homeowner.

Arrested and booked into the Tuolumne County Jail, Joslin faces burglary and possession of stolen property charges. As investigators are still looking to recover a heater and iPhone 6 that also went missing in the incident, the sergeant adds that more charges may be pending.