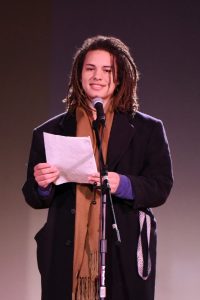 Sacramento, CA — He did it again. A local student has won the California Arts Council’s Poetry Out Loud competition for the second time in three years.

The state finals were held in Sacramento over the past two days, and Levi Lowe was the top finisher.

Lowe also won the competition in 2015 as a sophomore at Sonora High School.

Lowe now moves on to the national competition April 24-26 in Washington, DC. When Lowe competed back in 2015 he was one of nine students that transferred to the final round of the national contest.

Lowe will receive $200 for winning the California competition and his expenses will be covered for the trip to Washington, DC. In addition, his school will receive $500 to purchase literary materials.