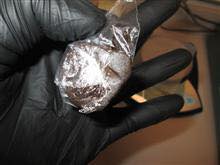 Drugs found during search of car

Jamestown, CA – After a traffic stop turned up heroin in a vehicle, one of the suspects tried to stash meth in the back seat of a patrol car, according to Tuolumne County Sheriff’s officials.

A deputy came upon a 1993 Toyota Camry driving in the middle of the roadway on Chicken Ranch Road heading towards Highway 108 just after midnight on Tuesday in Jamestown. Not only was the driving erratic but the vehicle’s registration sticker was expired. The deputy pulled the car over near Nelson Road and found three men from Modesto inside. A records check confirmed that all the occupants were on searchable probations and a look inside the car netted about 4.20 grams of heroin and drug use paraphernalia.

Moran racked up additional drug charges by taking more than a quarter gram of methamphetamine from a second pair of pants he was wearing unbeknownst to deputies and dumping it in the back seat of the patrol car. When deputies discovered the discarded drugs and questioned Moran, he admitted the drugs were his. Moran faces additional charges of destruction of evidence and possession of methamphetamine.