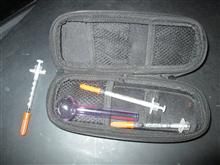 The incident happened near Jamestown on Highway 108 by the Montezuma Junction recently.  Tuolumne County Sheriff’s officials report inside the vehicle was 42-year-old Christopher William Kitchen and passenger 28-year-old Ashely Laurie Menking. A search of Kitchen revealed a concealed dirk or dagger and two hypodermic needles in his pocket.  Additionally, several needles were also found in the vehicle.