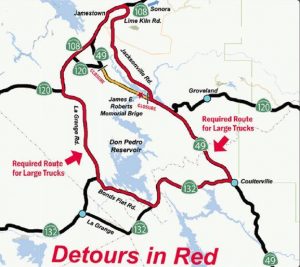 Sonora, CA — St. Patrick’s Day weekend may be more memorable due to a notable week-long bridge closure the following Monday.

Caltrans officials additionally state that, following the 24/7 closure that week, the span will need to close for a few additional nights to enable the removal of material and equipment.

The total project, a $20.8 million reboot, should be complete sometime in November of this year. Progress since last fall, when overnight closures began in earnest, includes full replacement of the bridge deck. As that is now complete, crews will soon shift their emphasis to work on the structure, itself.

Originally built in 1971 and known as the Tuolumne River Bridge, the span was one of many designed under the auspices of civil engineer James E Roberts, onetime chief engineer for Caltrans. It was back in 2007 that the state legislature passed a resolution, renaming the structure in his memory.