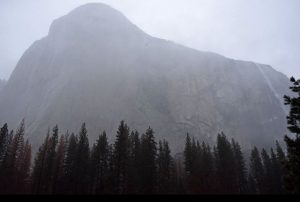 Update at 10:30am: Yosemite National Park officials have identified the woman who tragically died in the park on Sunday morning. 20-year-old Destiny Rose Texeira Borges of Ceres was hit by a falling tree in Half Dome Village, within Yosemite Valley, at 10am. It occurred at a time of heavy snow and high winds. Borges was working in the park for a company that is contracted by the park’s concessioner.

Half Dome Village, formerly Curry Village, is an area that has tent cabins and wooden cabins that are utilized by park visitors and park employees. Yosemite officials report that the area was closed yesterday after the incident , but reopened to visitors this morning.

Original story posted at 6:45am: Yosemite, CA — An unidentified woman died Sunday after being hit by a falling tree at Half Dome Village.

According to the Associated Press, park spokesperson Scott Gediman says the incident occurred in the area formerly known as Curry Village. No further information is immediately available.

Due to the winter weather in Yosemite National Park, Upper Pines Campground, Camp 4, Half Dome Village, and Huff housing are closed until noon today due to winds and snow increasing the risk of falling trees.

The only access for visitors to Yosemite Valley remains Highway 140 through Mariposa County.