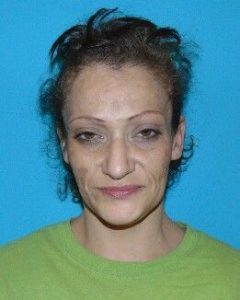 Sonora, CA — A Tuolumne County Sheriff’s Deputy stopped a vehicle for a broken brake light but it was not the driver who ended up behind bars – it was his passenger, who is also his wife.

The traffic stop happened on Wednesday just before 2 a.m. when a deputy saw a 1999 Nissan Quest with a brake light out and pulled it over at the Junction Shopping Center off Mono Way in Sonora. Behind the wheel was 34-year-old Jeffrey Goldstein and his wife, 33-year-old Crystal, who was in the front passenger seat. A records check on both revealed that the wife had three local felony warrants for violating probation, failing to appear while out on bail and ID theft. During a search of her purse, the deputy discovered a glass methamphetamine pipe containing white residue and less than a half gram of heroin, according to sheriff’s officials.

She was arrested and booked into the Tuolumne County Jail. She faces charges related to her outstanding warrants along with possession of a controlled substance and drug paraphernalia.