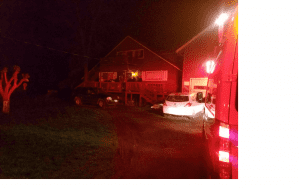 Sonora, CA — Following the appearance of a wounded man on a resident’s front porch, sheriff’s officials still have plenty of blanks to fill in.

Tuolumne County Sheriff’s spokesperson Sgt. Andrea Benson states that Sunday night just before 11, deputies responded to a home in the 20000 block of Bonnie Ct. in Soulsbyville. There, she says suspicious circumstances involving a man who appeared on the homeowner’s porch asking for help and claiming to have been shot, were readily apparent.

“When deputies arrived at the home, they found a man who had blood on his face and a gunshot wound to his left leg,” Sgt. Benson recounts. She adds, “The victim stated he was waiting for a ride at the Willow Springs Park when he was jumped by two males and was shot in the leg, but he would not give deputies any other information regarding the incident.”

Although deputies checked the surrounding area, also talking with nearby residents, Sgt. Benson reports that nothing else unusual was seen or heard. The victim’s injuries were sufficient enough that he was transported by ambulance to Sonora Regional Medical Center (SRMC) and subsequently flown to a hospital out of the area.

As an investigation into the incident continues, the Sheriff’s office requests anyone who might have information on any surrounding details behind what happened to please call deputies at 209 533-5815.