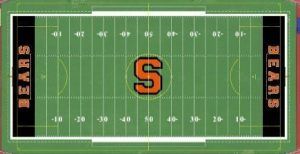 The public is invited to this Friday night’s Summerville Bears Quarterback Club “2017 Kick Off and Sponsor Thank You” Dinner.

Ron Roberson, President of the Summerville Bears Quarterback Club, was Wednesday’s KVML “Newsmaker of the Day”.

Reid recently retired from football after playing thirteen years for the BC Lions of the Canadian Football League. Reid was a team captain , a 3 time All Star, and a 2 time Grey Cup Champion. Reid didn’t begin playing football until the 11th grade and then he missed three collegiate seasons due to severe illness. He made it back for his senior season to become only the 5th All American in his school’s history. He was selected by the Toronto Argonauts with the 4th pick in the 2001 CFL draft but he was cut from the team at the end of his first training camp. Through sheer determination and relentlessness, Reid was able fulfill his professional football dreams with the BC Lions.

In addition to his success on the football field, Reid has become a star in his community. He writes a weekly newspaper column for the Vancouver Province, hosts a radio show on a Vancouver radio station and is also the host of Global TV’s “CrimeStoppers” and “The Monday Morning Blitz” show.

Reid regularly tours North America speaking out on such issues as ‘Violence Against Women’, ‘Bullying’, and the importance of health and fitness for today’s youth.

this Friday The chicken and tri tip buffet dinner will start at 6 PM inside of the Black Oak Casino Resort Conference Center.

Tickets are $35 per person and can be purchased through any Quarterback Club member. All 2016 sponsors receive two complimentary tickets.

The Club is an approved 501(c)3 non-profit organization whose members donate time, energy and money.