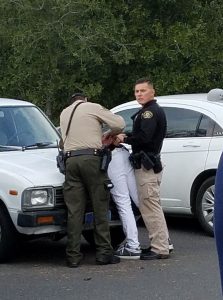 Sonora, CA — The Tuolumne County Sheriff’s Office received a report of a possible home intruder over the weekend at a residence on Karen Court in Sonora.

A man allegedly entered a home and was stumbling around and cursing. A child in the home saw the man, told him he didn’t belong there, and the man left. Deputies later located 19-year-old Tre Jackson nearby with some neighbors. Jackson told deputies he had arrived in the neighborhood with friends and was unfamiliar with the area. He saw the door ajar and walked inside hoping to find his friends. Deputies say the suspect showed signs of being under the influence of a stimulant, and he admitted to ingesting methamphetamine. He was arrested on charges related to being under the influence of a controlled substance. The Sheriff’s Office advises the public to always keep house and vehicle doors locked.