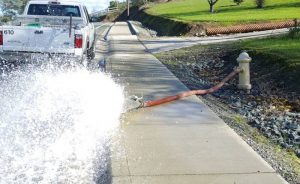 CCWD spokesperson Joel Metzger explains, “We’re just really glad to be able to do flushing again because for a few years during the drought we were not allowed to flush our systems as we normally would because we were trying to save water per state direction.”

Customers in the areas of Rancho Calaveras, Jenny Lind, La Contenta and Gold Creek will be impacted by the work that involves running high volumes of water through pipes to release built up minerals inside of the pipes. Metzger adds, “When we do flush because we haven’t flushed in some time, the minerals have built up a little more than they normally would have on the inside of the pipes. That means that more of the minerals get loosened and scrubbed off the inside of the pipes during flushing and that can cause discolored water.” Metzger notes if the tap water is murky customers should turn on the faucet at the lowest portion of your property and wait until the water runs clear. He also cautions not to wash whites in the discolored water.

The flushing is expected to last until the end of March as the large system will have to be broken up into sections to complete the project. The hours of operation are weekdays between 8 a.m. and 3:30 p.m. CCWD provides this list of roadways where flushing is scheduled next week:

Signs will be posted in the areas where flushing is taking place and customers are asked not to use their faucets for a few hours. Customers concerns or questions can be directed to CCWD’s Customer Service at (209) 754-3543.