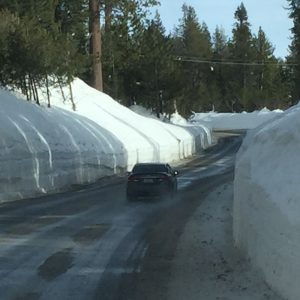 Snow berms along HWY 4 after recent storms in Calaveras County

Sacramento, CA – The Department of Water Resources finds a “very good” Sierra snowpack for its second manual reading of the year.

Out of 101 stations reporting in, the average snow water content is 30.6” and 173 percent of normal for this date and 109 percent of the April average.   DWR spokesperson Frank Gehrke had this reaction, “We’re just ecstatic about this. We are just so excited to see a big snowpack with, all in all, a great January from a snow accumulation standpoint.”

All three regions showed impressive measurements for January. The northern Sierra water content was 26 inches and 144 percent of the multi-decade average for the date. The central and southern Sierra readings were 32 inches, 173 percent of average and 32 inches, 200 percent of average respectively. Gehrke notes that the wet October definitely “pre-charged” the ground’s surface, stressing, “The runoff from this snowpack is going to be more efficient and effective since we had a stormy October.  It was a real boost to both the forest environment and also reservoir storage.”

Currently, New Melones Reservoir is at 72 percent of the historical average for the date and Don Pedro is 128 percent. This is not the first time there has been a strong start to the water year followed by a dismal ending. Regarding how California would fair if the state gets no more snow, Gehrke acknowledged, “If we get into March, if we don’t have storm activity, it’s kind of a double whammy…A long stretch in March with no storm activity would start to eat away at the snowpack, especially in the lower elevations…The downside is if we do have early melt, say starting in March, some of the water would have to be released because they’re still having to maintain flood control space in some of the big reservoirs.”

The Sierra Nevada snowpack typically supplies 30% of California’s water during a given year.