2017 Shaping Up To Be One Of The Wettest Years 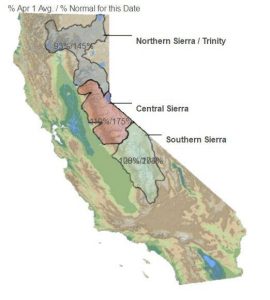 DWR officials tap the atmospheric river storms and rainfall from lesser storms that drenched the state since the 2017 water year began in October for higher figures. The second manual snow survey will be conducted Thursday in the Sierra Nevada. DWR spokesperson Ted Thomas relays the electronic findings, “The water content of the snow is 174 percent of normal. We’re way ahead at 108 percent of the normal seasonal totals. Actually, it’s 8 percent above the total accumulation that we normally receive in early April when the snow pack is at its peak.”

Thomas adds that all three regions (North, Central and South) continuously monitored for rainfall had recorded more by January 23 than their annual averages for the entire water year, which runs from October 1 through September 30.   Although the five year drought cannot be declared over due to a number of reasons and impacts, according to Thomas, he adds these readings are definitely putting a dent in it.