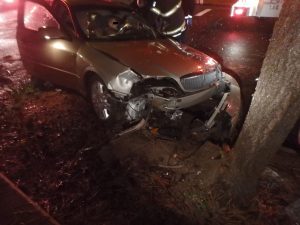 Police report a 2004 Lincoln sedan, driven by a 71-year-old Sonora man, went through the stop sign at the intersection of South Shepherd and East Church streets. The sedan smashed into a 1999 Dodge pickup, driven by a 37-year-old Sonora man, traveling eastbound on Church Street. The driver of the truck slammed on his brakes but was unable to avoid smashing into the sedan. Police say the force of the collision caused the Lincoln to hit a small retaining wall.

The driver of the sedan was treated for minor injuries at Sonora Regional Medical Center. His car had extensive damage to the front end.  Drugs or alcohol are not suspected in the crash, which police say is under investigation.