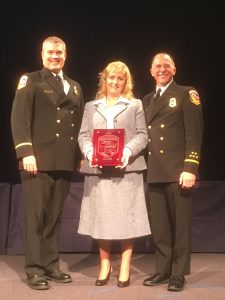 CAL Fire Tuolumne-Calaveras Unit Chief Josh White nominated Riggs, sharing he has been working closely in tandem with her since the Rim Fire disaster and now during the state’s Tree Mortality Emergency. Her office leads local efforts and she also serves on the state task force. “She is absolutely so efficient and effective…she has an ability to motivate people but keep everything very friendly and is a great partner to work with,” White states.

“There are a number of other counties that have reached out to Tracie [about tree mortality issues] to find out what Tuolumne County is doing,” White continues. “Because of her leadership Tuolumne County is ahead of the curve…the first county to have their plan approved by the California Office of Emergency Services…one of the first steps towards getting some specific funding for the CA Disaster Act funding…the first county to have the CDA funding allocated.”

White chuckles. “I know Tracie would say that is a partnership of everybody working together and I completely agree with her. But she is that one catalyst — I think [Tuolumne County Tree Mortality Project Manager] Mike Albrecht once described her as a spark plug that gets everyone going — and I was just happy that the Director recognized that and gave her the award.”