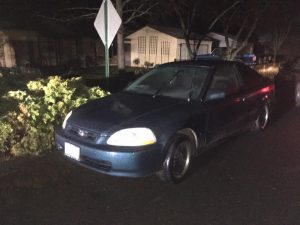 Sonora, CA – An investigation by Tuolumne County Sheriff’s Narcotics Agents regarding a stolen car led to the arrest of the suspect for more than just auto theft.

On Wednesday evening, detectives went to a home on the 19000 block of Sunny Circle in Sonora to check out a 1996 Honda Civic vehicle parked outside as one had been reported stolen out of the Sonora area several days prior. At the home, deputies found 26-year-old Richard Eugene Lowe Jr. and began questioning him.  Additionally, a records check was done and it revealed Lowe had three outstanding warrants for his arrest for various charges related to drugs and their transportation and sales. Lowe Jr. also had items related to the car in his possession.

Lowe Jr. was arrested on his outstanding warrants and an additional charge of being in possession of a stolen vehicle.  Sheriff’s officials report the vehicle will be returned to the rightful owner.