Sierra Nevada Snowpack At 161% Of Normal 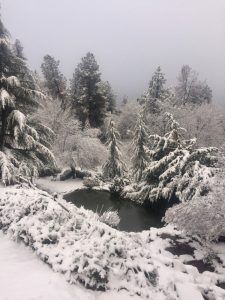 Sacramento, CA — The heavy storm system over the past week has given a big boost to California’s Sierra Nevada snowpack.

We reported recently that officials found only a 53% of average snowpack during the first manual reading near Lake Tahoe on January 3. California Department of Water Resources electronic sensors this morning indicate that the statewide average is now about 161% of normal. Breaking it down by region, the northern Sierra is 135%, the central Sierra (includes the Mother Lode) is 162% and the southern Sierra is 191%.

Also of note, the snowpack is at 72% of what is typically found April 1st, which is the time when it generally peaks before melting off during the spring.

A special thanks to community news partner Mark Groghan for sending in photos this morning of snowfall in Soulsbyville. Pictures can be e-mailed to news@clarkebroadcasting.com.