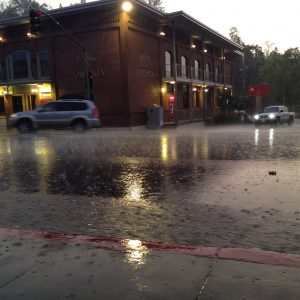 As one Atmospheric River system exits, another one is on its heels. It will bring heavy rain totals to the region through Wednesday.

A Flood Warning for urban areas and small streams remains in effect until 9 AM this morning for southwestern Calaveras County.

Rainfall amounts have ranged from two to five inches over the past 48 hours.

This rainfall has caused widespread small stream flooding along with urban flooding of poor drainage locations.

Anyone living near a small stream should closely monitor and evaluate their flood risk and prepare to evacuate if flood waters threaten.

A Flood Watch remains in effect for the Mother Lode and the Northern San Joaquin Valley through Tuesday afternoon.

Rainfall totals from Saturday night through Wednesday are expected to range from four to six inches in the Central Valley and seven to sixteen inches in the Mother Lode and the Sierra Nevada below 6,000 feet.

Even after the rainfall diminishes, runoff from the abundant water will keep streams in flood stage for several days.

A Flash Flood Watch for the Sierra Nevada is now in effect through Wednesday afternoon.

Significant rises along small streams and rivers could occur Tuesday night and Wednesday along with a threat of rock slides, mud slides and debris flows.

Travel could be very difficult. Some roads may be flooded or impassable. Avoid driving through unknown depths of water.

Turn around. Don`t drown. Most flood deaths occur in vehicles.

Additionally, a Winter Storm Warning for the Sierra Nevada is in effect until 10 AM Thursday.

Snow will continue through tonight, with a break on Tuesday morning before increasing Tuesday night through early Thursday.

The heavy snow will make many roads impassable and may produce widespread power outages due to the weight of the snow on tree limbs and power lines. Strong winds will lead to blowing snow, reduced visibility and additional power outages.

Winds of fifteen to twenty-five mph will continue in the Sierra, with gusts up to fifty mph.

A Flood Warning means that flooding is imminent or is occurring. All interested parties should take necessary precautions immediately.

A Flash Flood Watch means that conditions may develop that lead to flash flooding. Flash flooding is a very dangerous situation. You should monitor later forecasts and be prepared to take action
Should flash flood warnings be issued.

A Flood Watch means there is a potential for flooding based on current forecasts. You should monitor the latest forecasts and be alert for possible flood warnings. Those living in areas prone to flooding should be prepared to take action should flooding develop.

A Winter Storm Warning for heavy snow means severe winter weather conditions are expected or are occurring. Significant amounts of snow are forecast that will make travel dangerous. Only travel in an emergency. If you must travel, keep an extra flashlight, food and water in your vehicle in case of an emergency.