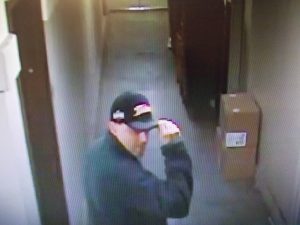 Angels Camp, CA — The Angels Camp Police Department is seeking information about a man that allegedly stole a car from the parking lot of Rite Aid.

The PD reports that an unknown man entered the business and went back to the employee locker room. He reportedly cut off the lock to one of the lockers and stole a pair of keys. According to the Police Department, the man used the remote to find the vehicle in the parking lot and unlocked the door. The suspect was in and out of the store in a matter of minutes, and is reportedly unknown to the employees. You can see a surveillance photo of the man in the image box.