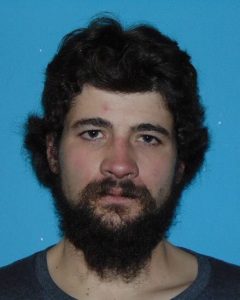 Jamestown, CA — A man was caught in the act of trying to burglarize a Jamestown business over the weekend.

It happened just after midnight on Saturday. The Tuolumne County Sheriff’s Office reports that 29-year-old Brandon William Boatwright allegedly broke the glass portion of the door at the Hair Shack in the 18000 block of Main Street. A friend of the business owner saw the suspect through the window and stepped outside and confronted him. The suspect then took off running.

Sheriff’s Deputies and CHP Officers soon arrived on scene and searched the area for the suspect. Boatwright was located near Jamestown Elementary School with freshly bloodied knuckles. Boatwright was arrested and booked into Tuolumne County Jail on charges of attempted burglary and vandalism. He also had an outstanding arrest warrant for failing to appear in court on a drug possession charge.