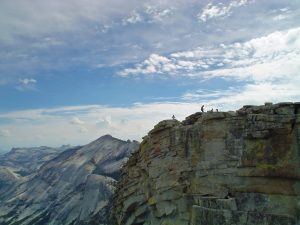 Yosemite, CA — A trek to Half Dome on a closed trail led to a helicopter rescue at Yosemite National Park on Wednesday.

Park officials report a man and a woman in their mid-30’s headed out around 8 a.m. up the Mist Trail towards Vernal Falls. Although signs were posted, they went into an area that had been closed due to snow and ice creating hazardous conditions. The female hiker stopped at the “sub-dome” summit, according to Park spokesperson Jamie Richards but the male continued up to Half Dome getting to the cables. Richards continues, “He started to slide and got himself into a situation where he could not self-rescue from and the park service received a 9-1-1 call at 3 p.m.”

A helicopter was called in from the Fresno CHP and provided air support. The fallen climber was found around 4:30 p.m. and two search and rescuer crew members were flown into the area around 5 p.m. They were able to reach the climber who was not hurt. The rescuers led the two hikers to safety arriving at the bottom of the Mist Trail around 10 p.m.

The two hikers could face fines for disobeying posted closed trail signs. However, Richard states, “This is a situation that the National Park Service law enforcement is investigating. It is an active investigation…After it is concluded, decisions may be made but at this time we have no intentions to go there.” She adds the hikers had no snow or ice gear with them.