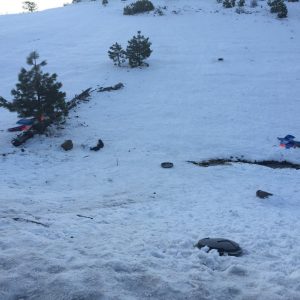 Tuolumne County, CA — It is a great time to recreate in the Sierra Nevada, but the CHP reminds visitors there are many rules of the road to remember.

On Monday there was a notable increase in the number of vehicles parked illegally near Little Sweden on Highway 108. It is traditionally one of the most popular spots following a snowstorm. CHP Officer Faustino Pulido notes that 17 citations were issued throughout the day for vehicles parked illegally. As you can see from the photo, there was also quite a bit of litter left near the highway. This was a big issue last winter as well, as the Mother Lode finally saw a season of near average precipitation following three years of drought.

Speaking about Little Sweden, Officer Pulido notes, “It’s a very popular place for people to sled and play in the snow, but unfortunately that area is also very dangerous. The shoulders on the highway are usually plowed to allow for pedestrians to walk up to the sledding hill, but when motorists stop and park illegally at this location, it pushes pedestrians out into the traffic lane. So we would encourage those people to find other less crowded areas to snow play, if possible.”

Officer Pulido goes onto add, “We have also found large amounts of garbage left behind, so please pick it up and take it with you, so others can have the same experience when traveling up there.”

The coming week is again anticipated to be very busy in the high country as New Year’s Day falls on a Sunday.