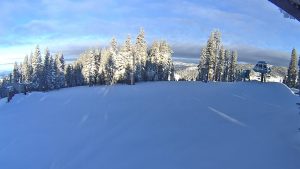 Pinecrest, CA — Bear Valley opened back on November 25 and Dodge Ridge cranked up the lifts on Christmas Day.

Dodge Ridge opened after the recent storm system brought 14 inches of snow to the summit and 12 inches to the base. The summit is 8,200 ft. in elevation and the base is 6,600 ft. Seven of the 12 chair lifts are operational. The resort reports that early season conditions exist so everyone is urged to ski or ride with extra caution.

It was a later opening day than most years. The earliest that the resort has opened is October 30, but it was as late as February 12 during the historically dry 2013-14 ski season.

Bear Valley, meanwhile, was able to open earlier because it can make its own snow.