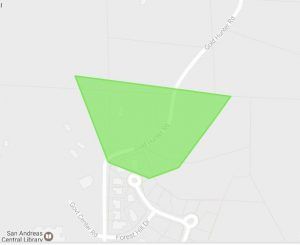 Update at 6:40 a.m.: A solo vehicle crash into a power pole may be to blame for a PG&E outage in the San Andreas are. The company reports eleven customers along Gold Hunter Road off Mountain Ranch Road have been without power since about 1:30 a.m. That is the same time the CHP reports a sedan smashed into a pole in the 1400 block of Gold Hunter Road. However, PG&E has not yet released a cause for the outage but confirmed that a crew is on scene assessing the situation.  The CHP reports that the vehicle is holding up the pole and it needs to be stabilized before tow crews can remove it. That may be why company officials have given an estimated repair time of about 3:19 p.m.

There were no injuries reported in the crash.

Original post at 5:39 a.m.: San Andreas, CA — A power outage early this morning has left a handful of PG&E customers without electricity, and in turn, no heat on this freezing cold morning.

PG&E reports eleven customers along Gold Hunter Road off Mountain Ranch Road in the San Andreas area have been without power since about 1:30 a.m.  The company says a crew is on scene assessing the situation.  It is not known if the chilly weather is to blame as no cause has yet been determined.  The estimated repair time is about 3:19 p.m.