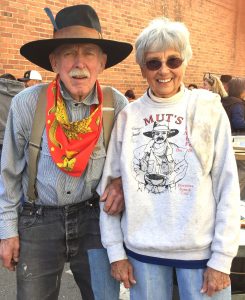 Rain, drizzle, freezing temperatures, sleet and sometimes snow has never stopped the free Mutz´ Bean Feed for the past 29 years in downtown Sonora.

It was twenty-nine years ago on a Friday before Christmas, that Mutzner decided to set up on the sidewalks of downtown Sonora and began serving beans for free to anyone who stopped by and wanted them.

It continues to be one of the most popular free events that surrounds Christmas in Sonora.

When asked how much longer he will serve beans (and other food including garlic bread), Mutzner responds by saying, “I would like to make it to my 30th Annual Bean Feed next year. I’ll be 90 years old then. It’s my party, so I’ll keep doing this for as long as I want. After that, it’s up to the boys”

The Bean Feed will begin at noon tomorrow (Friday) and it will be followed by the traditional Pop Hudson Sing, this year once again at Coffill Park in Sonora.