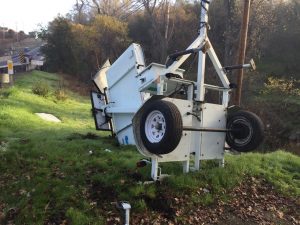 Jamestown, CA — A Copperopolis woman was arrested this morning after she lost control of her SUV and it crashed into a Caltrans message board.

It happened at 7:55am on Highway 108/49 near Bell Mooney Road outside of Jamestown. CHP spokesperson Faustino Pulido says 23-year-old Ashlee Okelsrud was driving her 2013 Jeep Grand Cherokee allegedly “under the influence of drugs or medications.” Due to her level of impairment, Officer Pulido reports that Okelsrud traveled off the east roadway edge and hit the message board. She then continued on the highway, over the Woods Creek bridge, and eventually went off the shoulder. The vehicle became disabled just north of the bridge, partially blocking the northbound lane of Highway 108/49. Traffic in the area was impacted for approximately 30 minutes. Officer Pulido says Okelsrud was arrested and booked into the Tuolumne County Jail for suspicion of drugged driving. She also reportedly suffered minor injuries as result of the crash.