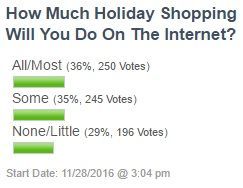 An informal MyMotherLode poll asked, “How Much Holiday Shopping Will You Do On The Internet?” The answers were All/Most with 36 percent of 691 votes, followed closely by Some with 35 percent and None/Little with 29 percent.

The Monday after Thanksgiving, known as Cyber Monday, remains the biggest day of the year for online spending since 2010. Online sales the day after Thanksgiving, Black Friday, are increasing as companies offer deals both in stores and online. The Associated Press reports research firm comScore found daily spending from desktop computers rose 17 percent to $2.67 billion not counting shopping done on tablets or smartphones. Amazon.com was the busiest site, followed by sites for retailers Walmart, Kohl’s and Target. Since Nov. 1, sales have risen 12 percent to $29.7 billion compared with the same period a year ago, comScore said.

“It was a strong weekend for retailers, but an even better weekend for consumers, who took advantage of some really incredible deals,” NRF President and CEO Matthew Shay said. “In fact, over one third of shoppers said 100% of their purchases were on sale.”