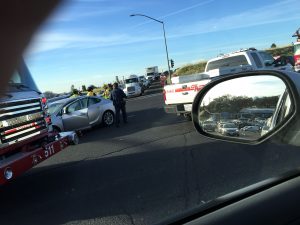 Sonora, CA — The CHP has released the names of those involved in a two-vehicle wreck that stopped traffic on Mono Way towards the end of the morning commute Tuesday.

As reported here, the crash happened around 8:10 a.m. at the intersection of the Highway 108 Bypass. The CHP reports that David Alan Maliszewski, 44, from Irmo, South Carolina, was driving a 2016 Buick Verano eastbound on Mono Way when he ran through a red light and smashed into William Thomas Bojorques, 67, from La Grange driving 2016 Lexus RX350. Bojorques had a green light and was turning left from the eastbound bypass off-ramp onto Mono Way the two vehicles collided.

The crash initially shut down the intersection and then officers directed traffic for about 30 minutes as tow crews removed the wreckage.  Bojorques was taken by ambulance to Sonora Regional Medical Center suffering minor injuries. Maliszewski was not injured.