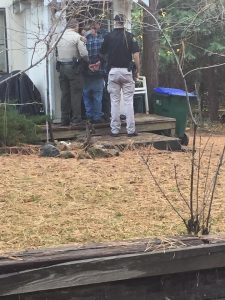 Update at 11:15am: The Tuolumne County Sheriff’s Office has identified the man involved in this morning’s incident as 28-year-old Steven Gentis.

Update at 11:05am: More details have been released by the Tuolumne County Sheriff’s Office regarding a standoff with a barricaded Sonora man.

At around 1:55am the man’s father notified the Sheriff’s Office that his 28-year-old son came over to his house near Confidence and took a gun. The son was not supposed to be at the home, and the father called to report the gun as stolen, and to request that the son be checked on by law enforcement. At 3am deputies located the son starting to drive away from his home in Sonora. Deputies tried to pull the son over, but he refused to do so. The man continued to drive, obeying all traffic laws, but refusing to pull over.

Eventually the man pulled his vehicle over on Highway 108 near Leisure Drive, close to where his parents live. The son took out the gun and shot the inside of  his vehicle several times. He then stepped outside the vehicle, holding the gun in his hand, and asked why law enforcement wasn’t shooting him. He went back into the car and negotiations between he and law enforcement lasted for about 6 1/2 hours. Family members were also involved in encouraging the man to come out peacefully. He eventually threw the gun out of the vehicle and was taken into custody without further incident. Deputies walked the man over to his family members, where they embraced him, prior to him being taken by ambulance for a medical and mental evaluation.

Update at 1030am: Highway 108 is back open near Leisure Drive. The Tuolumne County Sheriff’s Office reports the unidentified armed man threw the gun out of his vehicle and deputies were able to peacefully take him into custody for a mental health evaluation.

The Sheriff’s Office adds that deputies took the man to speak to his concerned family before the officials performed a medical evaluation. No further information is immediately available.

Update at 9:20am: Law enforcement officials continue to encourage an armed man to exit his vehicle peacefully in the area of Highway 108 near Leisure Drive. Members of the man’s family are also helping the Sheriff’s Office. Sgt. Andrea Benson reports the man has a history of mental illness and has not been taking his medication. There is no one else in the vehicle with him. Highway 108 remains closed near Leisure Drive so continue to avoid the area. An alternate route is Middle Camp/Sugar Pine Road.

Update at 7:35am: Sheriff’s Office spokesperson Sgt. Andrea Benson reports that officials have been negotiating with the barricaded man for about four hours. He is armed with a gun and suicidal. Highway 108 remains closed near Leisure Drive, so continue to avoid the area. An alternate route is Middle Camp/Sugar Pine Road.

Original story posted at 7:20am:  The Tuolumne County Sheriff’s Office asks that you avoid Highway 108 near Leisure Drive.

The area is situated between Sugar Pine and Confidence. Since around 3am, multiple law enforcement agencies have been involved with an incident involving a barricaded subject. Highway 108 is currently closed at Leisure Drive, so Middle Camp Road is an alternate route. We’ll pass along more information when it becomes available.