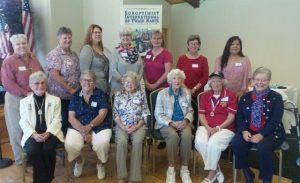 Twain Harte, CA — Women veterans and those currently serving in the military were honored for their service by the Soroptimist International of Twain Harte.

The group held its 8th Annual Women Saluting Women luncheon recently at the Twain Harte Golf Club.  The event opened with the Presentation of Colors followed by the Star Spangled Banner. The luncheon also helped to kick off the celebration of the Twain Harte Soroptimist Club’s 50th Anniversary, which is June 19, 2017. A special cake with the 50th anniversary logo was served as Teri Foreman, who was in the Navy from 1988-2008, told tales of her time in service.