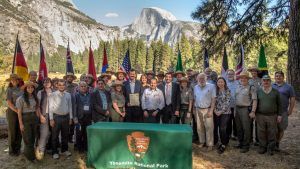 Yosemite, CA – With the stroke of a pen, agreements with three new International Sister Parks are signed meeting a Yosemite National Park goal.

Park officials report the objective was to establish a Sister Park on six continents to strengthen international relations and to enhance the International Affairs program. The agreements were signed in September with representatives from most of the sister parks. The final three sister parks are Cumbres de Monterrey National Park in Mexico, Blue Mountains National Park in Australia, and Wadi Rum Protected Area in Jordan.

This pact allows Yosemite to share information and resources, learn from fellow Rangers and park managers across the globe, share best practices in park management, exchange technical assistance, and expand opportunities for collaboration in the areas of resource management, according to park officials.

“We are elated to formally welcome three new international sister parks,” stated Mike Gauthier, Yosemite Chief of Staff and International Affairs Program Manager. “We are excited to collaborate with our peers and bring Rangers from across the world together as we work to address many challenges facing parks and protected areas worldwide.”

Fifteen sister park agreements have been signed with parks in nine countries. The park provided this list: