Near Record Setting Precipitation In California 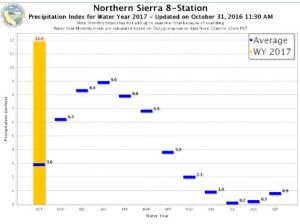 Sonora, CA — If it seems like there has been more rain this October than normal…you are right.

In the Northern Sierra Nevada, where the California Department of Water Resources has eight weather recording stations, 11.9 inches of rain has fallen this month, on collective average. A typical October for the northern region sees around three inches. Doug Carson, spokesperson for the DWR, says it marks the second wettest October since records started being kept in 1921. Only 1963 saw more precipitation. The total precipitation for the northern region is 398% of average for the date.

Carlson adds, “It’s been a remarkable month of October, but unfortunately we can’t project forward to say that the drought will be significantly impacted and reduced, we’ll just have to wait and see how the remainder of the water year plays out.”

Even more precipitation is anticipated across the Sierra Nevada late this evening and into Tuesday as the calendar turns from October to November.